Well finally the last and most important bit of the puzzle has been completed. That bit is the liftout section that completes the double track around the room. It is only a short piece that lifts out across the doorway. This then allows access to the room when the layout is not in operation.

This section has a facing crossover on it which allows trains on the outer circle to crossover to the inner circle. This will be used mainly for locomotives heading towards the loco depot. At the moment it is not powered but the panel has provision for its use, the buttons already in place. It is planned to use top mount Peco point motors as it will be easier than mounting them underneath.

Cork is laid under the main line tracks mainly to provide a shoulder for the ballast. At each end of the liftout section the track has been soldered to printed circuit board to ensure a stable link between each baseboard, so far it has remained stable and still lining up despite the recent rain which hasn't effected the timber. 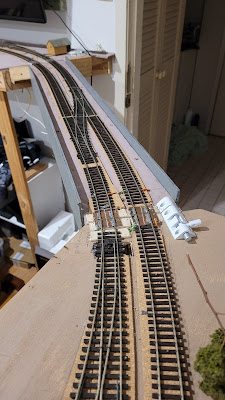 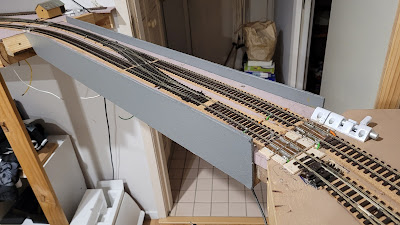 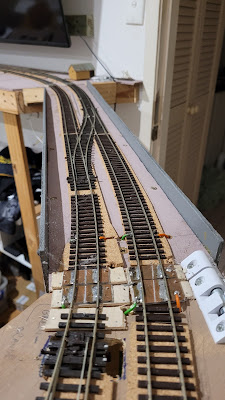 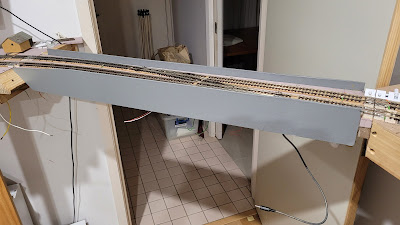 As can be seen in the above photos 'safety boards' have been installed along the edge of the liftout section as a definite safety requirement. A derailment or a bump or a misalignment across the join could result in the train heading towards the floor. Better to be safe than sorry.
One end of the liftout has a tapered edge that easily allows the section to be lifted out from that end.
A rather large white bolt lock has also been installed as another safety measure as can be seen. Once the bolt is secured across the unit is locked into place. Unless a smaller tight fitting replacement can be found this will have to do for now. It will be painted and blended into the scenery.
So now the layout has been completed around the room and all that is left now is to start running a few trains. The hard part has been done.